Aimee is at college studying childcare and is adamant she wants to be a foster carer when she’s older and help children like her. If she does I am sure she will be great. She is young adult now but still lives with Jason, Jenny, Emily, and Simon (the baby Jenny was expecting at the end of the book). We meet up at least once a year.

Aimee still sees her birth mother occasionally. Jason also met his mother again when he took Aimee to contact, but Jenny went with him and it wasn’t as traumatic for him.

Aimee was in therapy for over two years, during which time she talked about some of her suffering and of those who were responsible. As a result of what she said one of her abusers is serving a prison sentence. Hopefully the others will too eventually.

Aimee had a dreadful start in life and she has done remarkably well. Many children who suffer as she did would be scarred for life. It is a testament to Aimee’s strength of character and Jenny and Jason’s wonderful care of her that she is able to live a happy and fulfilling life.

Well done all of you. Love Cathy x 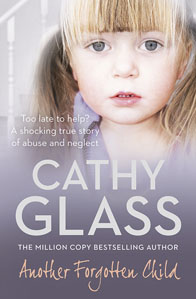